The Centre for Victorian Literature and Culture at the University of Kent is pleased to announce the launch of its website for display of the Sherborne House Macready-Dickens screen at https://www.kent.ac.uk/macready/index.html

The Macready-Dickens screen is a four-leaf, folding scrap-work screen that was created at Sherborne House, Dorset, by William Macready and Charles Dickens (according to family report) in the 1850s. The screen was donated to the Trustees of Sherborne House by Sir Nevil Macready. It has just been restored and conserved and will shortly go on display at the Sherborne Museum. Covered with almost 500 images cut from prints, it provides a unique window onto the world of nineteenth-century theatrical, literary, historical and political cultures. Approximately 70% of the images have so far been identified.

The website has been created to provide for public display of the screen. It enables users to study individual images in detail and provides research information about them where it is available. It forms an ongoing resource for anyone interested in Macready, Dickens or the ways in which Victorian objects relate to the lives of those who owned or made them.

Ian Hislop, satirist, broadcaster, historian, and editor of Private Eye, chats to Roehampton’s Dr Mary L. Shannon about his new radio play ‘Trial by Laughter’ (co-written with Nick Newman) which dramatizes the trial of William Hone for libel in 1817, press freedom, and the importance of satirical images in the nineteenth century. 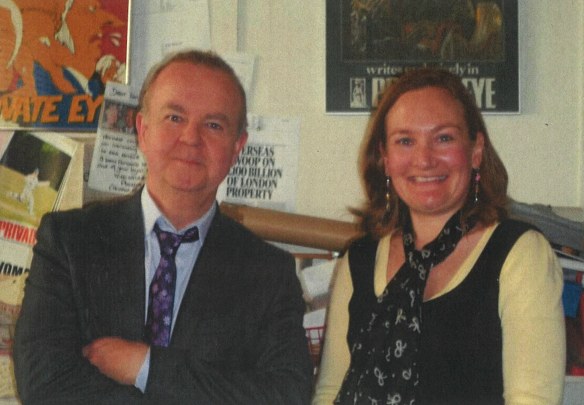 Anna Glendenning is a PhD candidate from Roehampton’s Centre for Research in Romanticism, who works on caricature. She reports here on the Romantic Illustration Network’s collaboration with the House of Illustration on a workshop for Y8 pupils, supported by the University of Roehampton.

On Thursday 3rd December, the House of Illustration in King’s Cross London was home to an exciting day of collaboration between local schoolchildren, RIN member Dr. Mary L. Shannon from the University of Roehampton, and professional illustrator Merlin Evans.

A group of thirty girls aged 12-13 (from Elizabeth Garrett Anderson School in Islington) braved a suitably chilly winter’s morning to visit the House of Illustration, where they immersed themselves in a special workshop on Dickens’s A Christmas Carol .  I also got to help out: it was hugely enjoyable to be part of such an inspiring day of interdisciplinary fun. For the full photostory, see http://www.roehampton.ac.uk/Courses/English-and-Creative-Writing/News/There-s-no-Bah-Humbug-this-Christmas-for-pupils-at-illustration-workshop/.

“The Second of The Three Spirits” or “Scrooge’s third Visitor” John Leech 1843 Steel engraving, hand-coloured 12.2 cm x 8.3 cm vignetted Fifth illustration in A Christmas Carol (London: Chapman and Hall, 1843), facing p. 78. The fifth illustration is John Leech’s introduction to literature of that “pre-Father Christmas” figure, the Spirit of Christmas Present, not quite sitting on a “couch” or “kind of throne” (77), but decidedly “a jolly Giant, glorious to see; who [bears] a glowing torch, in shape not unlike Plenty’s horn” (77). http://www.victorianweb.org/art/illustration/carol/5.html Scanned image and text by Philip V. Allingham.

Dickens’ text has long been a favourite in English classrooms, but it was the aim of this collaboration to give the girls a unique opportunity to explore the crucial role of illustrations – both conceptually and creatively – with two experts.

The HOI’s learning programme, with Head of Education Emily Jost at its helm, is dedicated to bringing illustrations into the limelight. Its core aim is to enhance knowledge of and confidence in visual communication for all. The Romantic Illustration Network (RIN) shares this enthusiasm. RIN’s project to restore the importance of visual culture in the Romantic period involves a commitment to sharing and to promoting access to the research it undertakes.

Mary Shannon, who specializes in Victorian print culture and is a Dickens expert, led a lively session. By contrasting different illustrations of Scrooge with Dickens’s narrative, trying out their own sketches, and learning from Shannon about Victorian Christmas traditions, the girls contributed lots of compelling thoughts and critiques, expanding their understanding of the relationship between illustrations and Dickens’s text.

After taking a look at the House of Illustration’s current exhibition, the girls returned to the studio for a special session with Merlin Evans. Evans brought in tools from her trade and shared some different techniques of collage-making and line work to help the girls to get to grips with the material qualities of producing images. The girls rummaged through photocopies of Victorian illustrations and had the chance to try out the new drawing methods Evans had demonstrated. The results were exquisite. The girls were able to compare their work with the earlier sketches they had made – a great way to show how their understanding of Scrooge’s character had developed over the course of the workshop, and, hopefully, to boost their illustration skills and confidence into the future.

Future collaborative workshops involving RIN’s Professor Ian Haywood (Roehampton) and Dr Susan Matthews (Roehampton) are in the pipeline, so watch this space in the New Year!

Mutual undermining by “Boz” and Cruikshank?

Mary L. Shannon’s paper, at the recent The Artist and the Writer RIN symposium, discussed how Dickens, in the guise of “Boz”, had used Cruikshank’s established visual persona to bolster his own. This led me to think about another “Boz” – Cruikshank relationship from August 1838 in Bentley’s Miscellany, where they had engaged in some mutual under-mining. The sketch in question was the ‘Full Report of the Second Meeting of the Mudfog Association for the Advancement of Everything’ which was ‘illustrated by George Cruikshank’.

Within this article is a discussion on the local beadle. “Boz” was given the chance to state his case first. Mr Sowster, the reader is informed, was a ‘fat man, with a more enlarged development of that peculiar conformation of countenance which is vulgarly termed a double chin.’ After some ‘unconstitutional proceedings’ in which Mr Sowster was employed as a bouncer for the Mudfog meeting, “Boz” announced that he had ‘procured a local artist to make a faithful sketch of the tyrant Sowster’. This likeness was ‘from the life, and complete in every respect. Even if I had been totally ignorant of the man’s real character, and had it been placed before me without remark, I should have shuddered involuntarily. There is an intense malignity of expression in the features, and a baleful ferocity of purpose in the ruffian’s eye, which appals and sickens. His whole air is rampant with cruelty, nor is the stomach less characteristic of his demoniac propensities.’ Such a description evokes terror, potentially comic, especially when considering the satirical trope of beadles.

As noted by Sally Ledger, one of the prototypes for Mr Bumble, the beadle in Oliver Twist (1837-1838), was Robert Seymour’s 1830 engraving ‘Heaven and Earth’ in which a beadle, in a cocked hat, flowing robes and staff, descends from the clouds to deny relief to starving paupers (Figure 1: bottom centre). 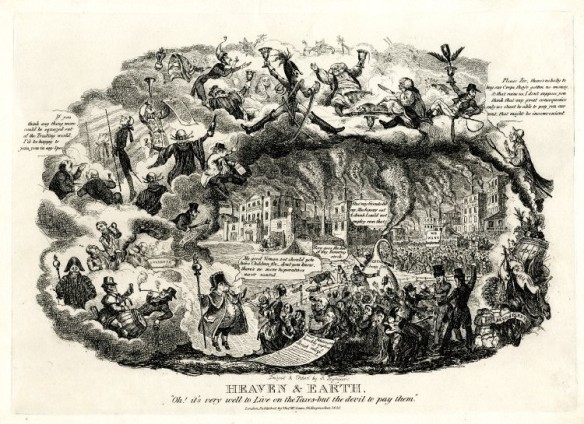 Ledger noted that ‘this image of the Beadle as a pompously attired, self-important petty official that established a satirical genealogy upon which Dickens and Cruikshank would together build a few years later in Sketches by Boz and Oliver Twist‘. Given the “Boz”-ian text, the date and the article title proclaiming the Cruikshank illustrations, the expectation for the first readers would have been a continuation of this trope. However, the ‘faithful’ sketch by the ‘local artist’ in Bentley’s Miscellany turned out to be quite different (Figure 2):

In Figure 2, Cruikshank has depicted Sowster as a benignly comic figure, all double-chin and belly with little arms and legs attached, rather than the ferocious tyrant per “Boz’s” description or the pompous petty official of the satirical stereotype. So who is right? Is the ‘local artist’ incapable of accurate sketching or has “Boz” been carried away by his rhetoric?

Dickens, Charles; ‘The Second Report of the Mudfog Association for the Advancement of Everything’; Bentley’s Miscellany; 4; (August 1838); 209-227.

We are delighted to announce that REGISTRATION is OPEN and the PROGRAMME CONFIRMED for:

‘The Artist and the Writer’ (a Romantic Illustration Network event)

Supported by the British Association for Victorian Studies (BAVS): http://www.bavs.ac.uk/ and the University of Roehampton.

REGISTRATION is FREE, but places are LIMITED. Register at: http://www.ies.sas.ac.uk/ies-conferences/ArtistWriter

Full programme below, and at https://romanticillustrationnetwork.wordpress.com/events/, where all abstracts will be posted in advance of the event.

We look forward to seeing you in November!

5.00pm Close. Please join us for a drink at a pub nearby.