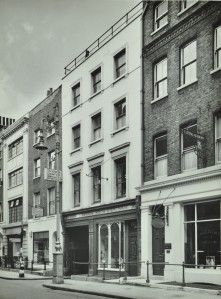 In the early-nineteenth century and into the 1840s, London’s Newman Street (just off Oxford Street) was popularly known as ‘Artists’ Street’ because of its intense concentration of artistic residents. Many significant names of the late-eighteenth and early-nineteenth century art world had addresses there: Thomas Stothard, Benjamin West, and James Heath, and other members and associate members of the Royal Academy. Alongside them were the homes and studios of less well-known artists who worked in many different media: sculptors, engravers, portrait painters and animal painters. Of the artists of Newman Street, a significant proportion worked on book illustration or literary subjects, or had close connections to famous nineteenth-century literary figures. They collaborated with, socialised with, and employed one another. They also dealt with other businesses on Newman Street, including the printers McQueen and Co., and the Hering family bookbinders. This talk will focus on the networks of ‘Artists’ Street’ and the surrounding parish of Marylebone, and use methodologies from cultural geography to show how interactions between art and literature played out on the ground in the print culture and visual culture of the early nineteenth-century.

Attendance and booking are free at the Institute of English Studies website.