The Romantic Illustration Network held its opening event at the British Academy in London last Friday.

Leading and emerging scholars of eighteenth- and nineteenth- century visual culture gathered to discuss the materiality of the visual image and the printed text, in the beautiful surroundings of the British Academy’s Lee Reading Room. 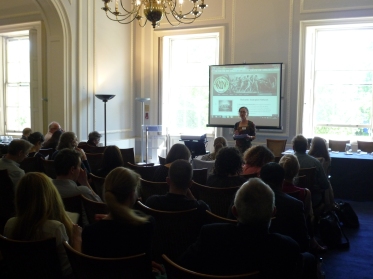 Susan Matthews (Roehampton) welcomed attendees, and used the OED’s definition of ‘illustration’ to suggest that the term itself is odder than we have come to believe it is. She pointed out that in the early nineteenth-century the word was used regularly in both its visual and its verbal senses, and proposed that the world of book illustration is one which is less straightforward than one might initially think.

This theme of the inter-relation of text and image in the illustrated book was picked up by William St Clair (IES, London) in his paper ‘Towards a Political Economy of Book Illustration’, c. 1800-1820. St Clair showed us how a focus on literature and art as material transactions can move us away from notions of ‘cultural emanation’ or ‘influence’, if we ask questions such ‘who had access to which texts at which time?’ and ‘how did images get from producer to consumer?’. He argued that expected demand, rather than supply, drove the publishers’ offerings of illustrated books. St Clair brought items from his own collection to display as a mini exhibition during the symposium.

Brian Maidment (Liverpool John Moores) took us into the next part of the century; he surveyed ‘Comic Illustration in the Marketplace 1820-40’ through a close reading of a series of comic caricatures, prints, and illustrations. He emphasised that the Victorians did not invent the serialised illustrated magazine, and that examples from the 1820s and 1830s are under-researched and understood. He also discussed questions of the democratic nature of popular serial culture, and made the point that any discussion of visual radicalism needs to recognise the willingness of artists such as Robert Seymour to work in multiple kinds of publications for money. 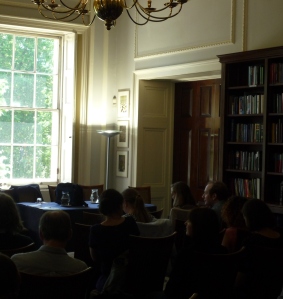 Moving into the Victorian period and digital materiality, Anthony Mandal, Julia Thomas, Nicky Lloyd, and Michael Goodman from Cardiff’s ‘Centre for Editorial and Intertextual Research’ presented three digital resources: the Database of Mid-Victorian Illustration (http://www.dmvi.org.uk/), the Victorian Illustrated Shakespeare Archive (under construction), and Lost Visions; Retrieving the Visual Element of Printed Books from the Nineteenth Century(http://cardiffbookhistory.wordpress.com/2014/02/09/lost-visions/). Together these papers demonstrated how practical and theoretical considerations must be tackled in tandem on such digital projects, and how online academic resources can be rigorous and scholarly as well as accessible.

The symposium closed with an open discussion which drew together various different strands from across the day, and also pointed towards profitable new lines of inquiry, before we all headed for a sociable drink nearby. Apart from the lively buzz at the event itself, if such Network-building events are to be judged by the resources shared and the connections made, then RIN has got off to a productive and promising start.

Details of our inaugural symposium are below! Registration is free but places are limited. Please download the attached proforma, and return to Mary L. Shannon (Mary.Shannon@roehampton.ac.uk). Any queries can also be sent to this address.

We look forward to seeing you in June.

The Academy’s address is:
10-11 Carlton House Terrace
London
SW1Y 5AH
It is adjacent to the Duke of York steps leading to The Mall.