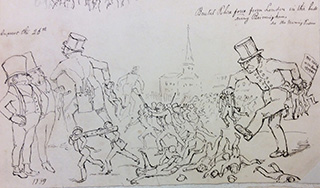 The oldest known drawing of a Chartist rally has been uncovered by RIN member Ian Haywood, after lying untouched in a sketchbook in the US Library of Congress for more than 175 years.

The pen-and-ink sketch from 1839 by Englishman Richard Doyle shows dozens of supporters being strong-armed by the Metropolitan Police who broke up the event. Officers were sent to the Bull Ring in Birmingham by the Government to bring an otherwise peaceful event in favour of political reform and social justice under control.

Doyle did not publish the image as he was only a teenager at the time, although he later went on to become an illustrator for Charles Dickens. There were no ‘respectable’ outlets for visual representations of current affairs in the late 1830s – neither the mainstream press nor the Chartist newspaper The Northern Star were able to publish illustrations at this time, and the famous satirical magazine Punch, for which Doyle later worked, was not launched until 1841.

This is why Ian Haywood’s discovery of the drawing is so important to modern understanding of Chartism. The drawing gives an insight into how observers at the time perceived the movement and the state’s response to it, several years earlier than previous records.

This image depicts in caricature form police brutality against peaceful, unarmed protestors in July 1839: the police and the authorities are depicted as giants wading into to the demonstration, kicking, scattering and grabbing Chartists by the handful. It is one of dozens of images in the sketchbook depicting open-air political meetings which suggests Doyle had a strong interest in contemporary events.

Ian Haywood said: “If Doyle’s image had been published it would have been the first visual representation of a Chartist demonstration and a significant blow for Prime Minister Lord Melbourne’s attempts to break up the movement. Doyle was a precocious talent and this could have made his name several years before he joined the staff of Punch and worked for Dickens.”

“From a historical perspective, this image is immensely valuable as it fills a gap in our knowledge of how ordinary people perceived the ‘threat’ of Chartism and also the vindictiveness of the state. It also confirms the dramatic significance of this event, the first major Chartist riot, which hardened resolve on both sides.”