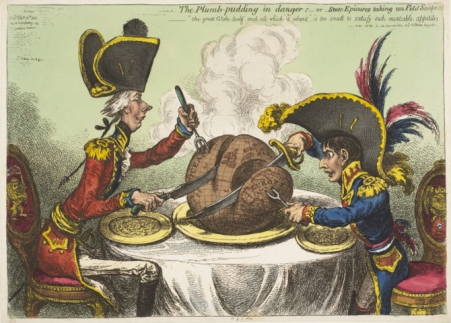 ©The Trustees of the British Museum

Bonaparte and the British: prints and propaganda in the age of Napoleon

This exhibition will focus on the printed propaganda that either reviled or glorified Napoleon Bonaparte, on both sides of the English Channel. It explores how his formidable career coincided with the peak of political satire as an art form. 2015 marks the 200th anniversary of the Battle of Waterloo – the final undoing of brilliant French general and emperor Napoleon Bonaparte (1769–1821). The exhibition will include works by British and French satirists who were inspired by political and military tensions to exploit a new visual language combining caricature and traditional satire with the vigorous narrative introduced by Hogarth earlier in the century. This exhibition includes work by James Gillray, Thomas Rowlandson, Richard Newton and George Cruikshank.