In the run-up to the US elections RIN organised a lecture and workshop on political caricature featuring recent research by Ian Haywood. The event was held at House of Illustration near London’s King’s Cross and is the first part of new collaborations with House of Illustration’s education and learning team, and with London branches of the University of the Third Age (U3A). 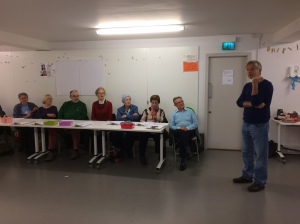 The day began with Ian Haywood’s lecture on ‘The Golden Age of Caricature’, which highlighted the evolution of British political caricature from the late eighteenth to the mid-nineteenth century, as well as the production and consumption of caricatures by contemporary reader-viewers. Following a discussion and Q&A session, participants enjoyed a guided tour of the galleries led by Emily Jost, House of Illustration’s Head of Education. 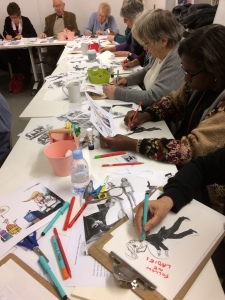 After the tour participants returned to the classroom for a practical workshop led by professional illustrator Merlin Evans. Merlin taught participants how to exaggerate select facial features to create caricatures of today’s political target par excellence, Donald Trump. In addition to creating their own images students also cut and pasted Victorian illustrations to create hybrid images. (One of these, a glowing orange Trump head on the body of a woodcut dragon, was particularly popular.) For many of the participants drawing was a familiar but uncommon experience. According to one U3A member, ‘I have not drawn for 60 years and really enjoyed this’.

A number of participants talked about how much they enjoyed the chance to look at caricature from a variety of perspectives. ‘The background talk mixed with attempts to do our own [drawings] was a great way to learn’, said one member of Ealing U3A.

RIN is pleased to be able to build on the day’s success and bring members’ work on illustration to new audiences. We will partner with House of Illustration to provide a series of lecture-workshops like this one in 2017. First on the list is Susan Matthews on William Blake and Medical Illustration on February 14.